After a few days exploring the beautiful coastal scenery of Margaret River, followed by a quick detour to Hamelin Bay and Cape Leeuwin, it was time to head inland on our Perth to Adelaide adventure for a rather dramatic change of scenery.

The turquoise ocean and crashing surf disappeared behind us as we entered the Southern Forests of Western Australia, otherwise known as Tall Timber Country. Here exists magnificent forests of marri and karri trees – some 300 years old. Karri is one of the tallest hardwoods in the world, reaching heights of 90m, and only occurs in south-west Western Australia.

We set up camp for the night in Big Brook Arboretum (see further down for details) in Big Brook State Forest in Pemberton WA. Then set off the next morning on the Karri Forest Explorer tourist drive. The Karri Forest Explorer is an 86km-long self-drive through the forests and national parks of Pemberton (click here for a map). Each tourist attraction is marked and easy to find, and you can do as much or as little of the route as you like. Here’s the route we took and all the sights we saw along the way!

From our campground at Big Brook Arboretum we headed along the unsealed road through Big Brook Forest to see Big Karri, a 300-year-old giant karri tree.

Our next stop was the 100m-high Beedelup Falls in Greater Beedelup National Park. 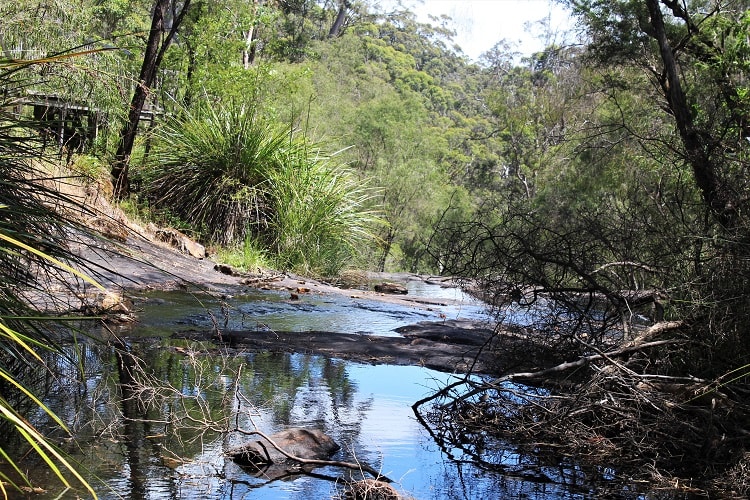 After Beedelup we got onto the Vasse Highway to take us down into Warren National Park, where we completed the one-way Heartbreak Trail that follows the Warren River through the karri trees. First stop Maiden Bush.

Next we stopped at the elevated Warren River Lookout.

Then the Blackbutt viewing area on the banks of the Warren River.

The main attraction along the Heartbreak Trail for us was the Dave Evans Bicentennial Tree, one of three Pemberton climbing trees open to the public. The Dave Evans tree has 130 climbing pegs leading up to the fire lookout tower 75m above ground level. The amazing views from the top span 40km across the forest, and in high winds, the cabin can sway up to 1.5m each way.

Michi climbing up towards the first platform 25m above the ground

While I hadn’t planned on doing the climb as it sounded ridiculously dangerous, I ended up changing my mind and following Michi up there! The pegs are quite far apart, about 40cm vertically, but horizontally they’re quite close together, so you don’t actually have huge gaps directly underneath you. There’s also mesh around the outer edge to enclose you.

I actually ended up quite enjoying the climb, whereas Michi, who’d been very excited about it, ended up shaking and not being sure if he could climb past the first platform!

He managed it though and we both went all the way to the top. The final part of the climb involved climbing a very steep step ladder up to the tower!

The view at the top was amazing and made it well worth the effort. The hardest part was actually climbing down the tree. The pegs are so far apart that it’s a huge strain on the knees to lower yourself, and they’re so narrow they really dig into your feet. You also get sore hands from twisting them around the metal pegs as you go down. I was pretty done in by the time I got to the bottom!

The only time it got really tricky was when people were trying to cross us in the opposite direction as it’s so narrow; this did only happen once though. I had to have a stand-off with a girl as she insisted she should both remain still and take the safer spot on the inside while I climbed around her on the outer edge of the pegs! I got her to stand still on the outer egde in the end while I climbed up the inside. You can’t have everything!

The climb was definitely worth doing though, and not half as scary as I’d expected. Alternatively you can climb the 60m Gloucester Tree in Gloucester National Park or the Diamond Tree south of Manjimup.

Our last stop on the Heartbreak Trail was the Marianne North Tree, named after the English artist whose 1880 painting of the misshapen karri tree hangs in a gallery in Kew.

Gloucester National Park was our next and final stop, where Lefroy Brook makes its way down a series of rocky shelves at The Cascades.

Me at The Cascades

Tips for Exploring Pemberton WA on the Karri Forest Explorer

We arrived in Pemberton the night before doing the Karri Forest Explorer and bush camped at Big Brook Arboretum, a very pretty spot in Big Brook Forest with basic facilities of toilets, picnic tables and a fire pit. We were made very welcome by the other (albeit much older!) campers there, and invited to join them around the campfire. Unfortunately by the time we’d cooked and eaten dinner they’d all gone to bed!

The fire came in very handy though as it was seriously cold, despite being the start of summer, though Michi then had to climb down to the brook to collect water to put it out before bed! We had our coldest and noisiest night ever with kangaroos thumping around right next to the tent, other animals making a noise and some of the campers snoring. Don’t assume the forest (or the elderly) will be peaceful!

It was also our first night camping somewhere without running water and a sink, and we quickly realised, whilst attempting to wash up in the dark with water warmed on the fire and our drinking water for rinsing, that we were in desperate need of a washing up bowl! Something we hadn’t thought of when buying our camping gear.

For more information about camping at Big Brook Arboretum, check the WA Parks and Wildlife Website. Note that you can’t book a spot here; you just have to turn up and pay using an honesty box.

Another unmissable attraction in Pemberton WA is the Yeagarup Dunes, the largest land-locked mobile dune system in the southern hemisphere. We camped there the night after doing the Karri Forest Explorer and just managed to catch the sunset.

These were so amazing that I’ve covered them in a separate post, but make sure you have time to visit them if you’re in Pemberton. I honestly think this was the most beautiful spot I saw on my whole Perth to Adelaide road trip, and I would visit here over doing the Karri Forest Explorer if you’re on a tight schedule. I mean, just look at the photo – it doesn’t even look real!